Today I welcome Andrea Downing, whose Western romance, 'Loveland', is a finalist for Best American Historical in the RONE awards, to be announced in August.  Her second book, 'Lawless Love' is free on Amazon from 9th to 13th July.  Congratulations, Andrea, on both your books.  You must be thrilled!  How did you come to start writing Westerns? 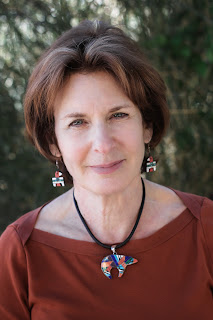 I grew up on a diet of television westerns—The Virginian, Bonanza, Alias Smith and Jones, The High Chaparral…I could go on and on.  But they took me to a time and place that somehow seemed more appealing than the suburban New York that surrounded me, and cowboys have always been my heroes.  When my daughter was six we started having holidays in the West on ranches and I became very involved with the whole culture of the West, its history and its landscape.  It was an obvious choice for a setting for my books.

‘Loveland’ features an English heroine and an American setting.  Did you find yourself making use of your experiences living in the US and UK when you were writing it? 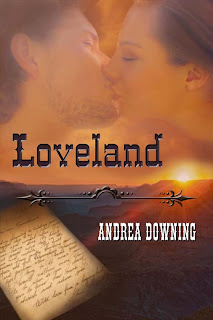 Absolutely.  I don’t think I could have got the language correct if I hadn’t lived in both places, nor the understanding of how these characters think.  Just as an aside, I had a small argument with my editor.  In Loveland, Lady Alex writes to her brother that she was never any good with “maths.”   My editor wanted to change it to the American “math” but I explained to her that “maths” was the British word.  She felt readers would believe it to be a typo but I left the ‘s’ on in the end as the correct way Lady Alex would have written it.

What (or who) inspired the characters of Alex and Jesse?

I can’t say anyone in particular inspired either, actually.  I felt that Alex, given both her privileged background and her unhappy childhood, would have been a somewhat feisty independent creature, especially once she got to the freedom of Colorado.  As for Jesse, well, I think he’s just my kind of man—strong but gentle and someone who knows when to let out the reins and when to pull them in!

‘Lawless Love’ comes out in September.  Can you tell us a bit about what to expect from it? 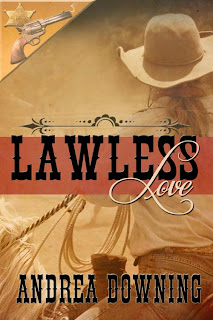 Hopefully expect a good story!  It’s got quite a bit of conflict packed into its few pages so it moves quite quickly I believe.  The heroine, Lacey, is another strong woman who just wants to make a good life for herself and her brother.  The marshal, Dylan, is a man who believes in the law above everything else. Lawless Love, by the way, is free this week only on Amazon from 9-13th July.

Your books have been described as “fun, feisty, and completely enjoyable” and “also serious, emotional, and historically fascinating.”  How do you balance the historical and personal sides of the stories you tell?

Readers don’t want a history dump; if they wanted to read history, they would buy history. But you must get the details correct otherwise a mistake is liable to take the reader right out of the story. But as for the personal side, I honestly don’t think people have changed that much in the last two centuries; they still face many of the same problems, they still want to be loved, they continue to find humour in similar things.  All right, so women can now have careers and so on but, basically, we know these characters.  So that’s the appeal, the balance:  people we know—or would like to know-- in an historical setting.

That’s a tough one because I certainly don’t write with a message in mind, I write to hopefully entertain.  But I would certainly like to think my audience came away with a little more than just a temporary enjoyment from a book that will be put down and forgotten; it would be nice to believe I had given them something to think about, whether it’s what life was like in the 1800s, or something more specific like the blizzard that occurs in Loveland and the effect it had on the ranches in real life.

You’ve travelled a lot.  Besides the wild west, will we find any of the locations you’ve visited in these, or future, books?

I haven’t any immediate plans for a book that’s not in a western setting although I do have a ms. put away that takes place during the Peninsula War(Napoleanic War between Britain and France that took place in Spain and Portugal--for our American readers!)  I also have an idea for a (US) Civil War story so that would be an east coast book.

Do you think having studied literature at a high level influences your writing in any way?

I think we learn from everything we read whether in the classroom or on the Underground, whether it’s classics or comics.  The reader who is also a writer must pick up some sense of what is right about a story, what is wrong, why this character is believable and another doesn’t ring true, why one image or description draws you in and another leaves you cold, what is working in the story and why.

What aspect of writing do you find the hardest?

Talking about it!!LOL..No, joking aside, I think getting from A to Z in a story is difficult—that is, the middle bit.  I almost always have the beginning and the end but getting there can be something of a chore. I’m a pantser so my characters write my books and when I begin it seems like the story won’t come together but so far they have.  I hope…

The Writer’s Idea Book by Jack Heffron has excellent prompts or exercises to get the creative juices flowing in the right direction.

What’s the best book you’ve read so far this year?

The Dividing Season by Karen Casey Fitzjerrell.  It’s—here’s that word again—literary fiction, yet a 1910 western of sorts, but really it’s a fabulous character study of a woman at a crossroads in her life.  I recommend it highly.

First and foremost there’s my website at http://andreadowning.com  My publisher is The Wild Rose Press with my books available at http://www.wildrosepublishing.com/maincatalog_v151/index.php?main_page=index&manufacturers_id=991  and then there’s Amazon where Lawless Love is available for free between 9 and 13 July at http://www.amazon.com/Lawless-Love-Lawmen-Outlaws-ebook/dp/B00D0TB0DO/ref=sr_sp-atf_image_1_2?ie=UTF8&qid=1371687415&sr=8-2-spell&keywords=lawles+slove

I’m also on Facebook at https://www.facebook.com/writerAndreaDowning and Twitter at @andidowning and in Goodreads at http://www.goodreads.com/author/show/6446229.Andrea_Downing  Thanks so much for having me here, Stephanie.  It’s been great to get across the pond once again and share some of my thoughts on writing with you.

Thank you, Andrea!  It's been a pleasure to hear from you.