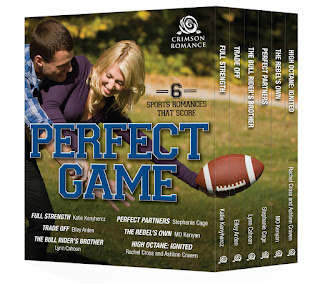 Just in case you missed it, here's a quick post to let you know that the Perfect Game 'box set' - six sporty stories in ebook form - is now out.  Alongside my dancing romance, Perfect Partners, there's the first of Rachel Cross and Ashlinn Craven's exciting formula one stories, High Octane: Ignited.  I loved it so much, I immediately had to go and download the rest of the series! Plus four other stories of sports stars getting their happy-ever-afters.  All for less than the price of a coffee!
Here's the official blurb:
Playing the field comes easy to these six successful athletes who are at the top of their games, but lasting love is harder to find. Watch them meet their perfect matches in these adrenaline-fueled sports romances. Are you game?
See this book on amazon US or amazon UK
box set Crimson Romance Perfect Game Perfect Partners