January 07, 2017
I wonder how often those words have been uttered over the course of the 13 years that Strictly Come Dancing has been aired? The celebrities who speak them are usually referring to the intense roller-coaster ride of a single series, but those of us who have been fans from the start have travelled a much longer and more rambling route. When the show started in May 2004 I was an English graduate, ballroom dance lover and aspiring writer in my late twenties, living near London and working in market research.  Over the years, my Strictly journey and my writing journey have become intricately entwined, thanks to an idea I had as soon as I heard that there was going to be a competitive dancing show on TV again for the first time since Come Dancing hung up its dancing shoes.   I’d noticed at university that the dancing world was something of a hotbed of gossip and romance, and thought it would be fun to combine a dancing show with something more relationship-focused – think ‘Strictly meets Blind Date’.  And so Couples, the fictional show at the heart of my first full-length book, was born.

If I recall correctly, the first draft of my novel based around the fictional show – the book which later became Perfect Partners - was written in the summer of 2004, but at that point I thought Strictly would be a nine days’ wonder and the market for a ballroom dancing book limited, and I chalked the novel up to experience and moved on.  I’d enjoyed writing about dancing, though, and in 2005-6, when I went to Bath to study for my MA in Creative Writing, and Strictly was back on our screens and gaining more of a mainstream following, I started to think there might be potential for the book after all.  As part of my MA I began work on the sequel, with a working title of A Step in the Right Direction. At the Romantic Novelists’ Association conference that year I pitched the concept to an editor from Mills and Boon, who was intrigued, and so I sent a draft of Perfect Partners off for their consideration and went back to work on my dissertation – 30,000 words of Step accompanied by a critical commentary.

When I’d submitted my final coursework, I went off to Australia for a fabulous three-month road trip, so I missed watching Strictly live that year, but my best friend was kind enough to record every single episode on video so that I could watch them on my return.  By the end of the series, I still hadn’t heard anything from Mills and Boon, so once again, the novel went back in my desk drawer.  And there it remained while the real world took over and I moved to Yorkshire, worked in a host of temporary office jobs, spent a spell as English Coach for a secondary school in an ex-mining village, and generally tried to figure out what I was doing with my life.  I carried on writing and in 2010 I achieved ‘published author’ status according to the Romantic Novelists’ Association’s rules, by selling my first novella, Desperate Bid, to US-based e-publisher The Wild Rose Press.  But I still didn’t have a published paperback I could hold in my hands. 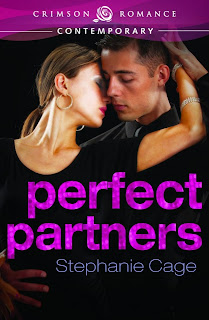 Then in 2012 I picked up a copy of Writing Magazine and read about a new romance publisher called Crimson Romance setting up in America.  I’d already seen enough publishers come and go to be slightly suspicious of new ventures, but this one had the backing of Adams Media, the publishers behind the phenomenally successful Chicken Soup for the Soul books, so I thought they might be worth a shot.  I dug out my dancing book, polished it up and sent it off.  To my delight, Crimson Romance accepted it.  I had to do some edits and fill in a long form about what I wanted on the cover – I could link to photos that had inspired me, so I sent a link to the photo gallery on Anton and Erin’s website. I loved the cover that came back, and by the time 2013’s Strictly season began I finally held my paperback in my hands and felt like a ‘real writer.’

But while I remained a fan of Strictly, and even got to watch an episode being filmed at Wembley, I wasn’t actually doing a lot of dancing myself.  Every year, during the Strictly season, I’d see adverts for dancing weekends with the stars of Strictly, but since my husband isn’t a dancer, we always ended up with other holiday plans.  But this year, he spotted an advert for a Donahey’s dance weekend with Anton and Erin which included lessons for absolute beginners, and suggested booking.  So, in May, I’ll experience another first in my Strictly journey – meeting the stars who inspired the characters of Redmond and Lisa in my book Perfect Partners. Who knows, perhaps the experience will even encourage me to return to work on the long-abandoned sequel!


If you have Kindle Unlimited, you can read Perfect Partners for free.  Otherwise, the cheapest way to get your hands on it is as part of the Spotlight on Love or Perfect Game bundle.  Click here for my Amazon.com and here for my AmazonUK page.
'Desperate Bid' 'Perfect Partners' amazon Anton du Beke ballroom dancing Crimson Romance Donaheys Erin Boag kindle Kindle Unlimited romance SCD Strictly Come Dancing The Wild Rose Press