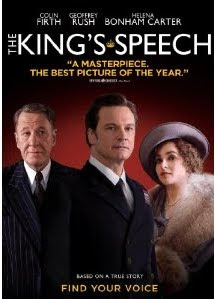 I loved 'The King's Speech', but then that's to be expected. I'm British and my friends sometimes tease me for being 'posh'. I take an interest in public speaking and I'm quite an admirer of Colin Firth (and not just for 'that' moment in 'Pride and Prejudice' either). On the face of it, though, 'The King's Speech' is not a film you'd expect to strike a chord with huge numbers of viewers from completely different backgrounds, and even some of the cast admit they have been surprised by the extent of its success. So why has it been such a hit with audiences all over the world?

I don't pretend to have the whole answer, but I do have some ideas. Firstly, of course, there is the star-studded cast: Mr 'Wet-Shirt' Darcy, the hugely glamorous Helena Bonham-Carter, and the very talented Geoffrey Rush. Then there's a script packed with witty observations about the British class system, the monarchy and what happens when a maverick Aussie takes on the establishment - there's no contest, obviously!

But the biggest thing the film has going for it is the underlying story: if you like, the Hero's Journey. It's a simple enough story. The hero is faced with a challenge - to overcome his terrible stutter and make a speech. In the ordinary run of things, it wouldn't matter a great deal whether he succeeded or not, but since this hero is a Prince, soon to be thrust into the role of King, and the speech is his inaugural broadcast to the nation, it matters quite a lot.

You may not be a monarchist, but it's hard to avoid feeling some sympathy for the Prince who's always lived in his brother's shadow, unable to express his own point of view thanks to a crippling speech impediment. We may not know what it's like to be a Prince suddenly faced with the elevation to Kingship, but most of us do know what it's like to be pushed into a position for which we feel unfitted and ill-prepared, whether it's a public-speaking situation ('Oh, I can't do that presentation on Tuesday. Take over, will you?'), a management role, a family responsibility or something else entirely. And because we know what that feels like, we soon find ourselves rooting for the Prince and his unlikely fairy godmother, the down-to-earth speech therapist Logue.

When the Prince is finally goaded into finding his voice, it's about more than his ability to get words out of his mouth. It's about believing that he will be able to step up and accept the huge responsibility that's been dumped in his lap. It's about knowing that he deserves to be heard. I think that's why so many people watched the climactic scene with tears streaming down their faces. For anyone who's ever felt silenced or invisible, and for anyone who's ever been afraid that they're not up to the responsibility they've been given, the King's Speech is a reminder that, with a little help from their friends, even the most unlikely people can be heroes.