Three of a Kind: Sci-Fi for Easter

April 22, 2011
I know, science fiction and Easter aren't exactly a usual combination, but I've been thinking about it recently because of rediscovering Colleen McCullough's extraordinary novel, A Creed for the Third Millenium.  Colleen McCullough is better known for writing The Thorn Birds, but she's an extraordinarily varied writer and Creed is a kind of futuristic retelling of the Easter Story, centring around psychotherapist Joshua Christian (the symbolism of the name is obviously intentional).  Joshua accidentally hits upon the cure for a condition he calls 'Millenial Neurosis', and in his quest to bring the cure to the world, he finds himself thrust into a prophetic role which sits uncomfortably with him and his family.

Two other science fiction stories which loosely retell the story of Jesus' life are Stranger in a Strange Land by Robert Heinlein, and Behold the Man, by Michael Moorcock.  Stranger was one of my favourite books for a long time, and I'm still fascinated by the idea of the Man from Mars, whose upbringing among Martians has given him almost god-like powers.  Behold the Man is an altogether darker story, but equally intriguing, as it tells the story of a man from the future who time-travels back to the year zero and discovers that the story of Jesus is not all it seems.

Three very strange books, but all with some intriguing points to make and of course a powerful story to tell (or retell).  They're all good reads at any time of year, but especially thought-provoking at this time, when the message of Easter is so relevant.

So, sorry, this post isn't exactly all fluffy bunnies and chocolate eggs... but Happy Easter anyway! 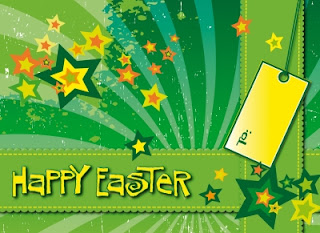