September 25, 2014
“I said—do you have any children?” The repeated question was spoken a lot slower and carefully enunciated this time, as if she herself were a child. The question, unbeknown to him, brought to the surface her secret, long held dream of having a child of her own. To raise her child to be loved and wanted, as she was never brought up. Never to be used as an accessory, then discarded when the party was over.

Rania shook her head sadly, partly to dispel the image and partly to answer his question, murmuring softly, “No. No, I don’t.”

She had a sneaky feeling the barriers she had long ago constructed were becoming more transparent with each passing minute of this conversation. His sharp gaze never seemed to miss a trick as he watched her smooth down her apron for the umpteenth time that evening.

“Why do you ask? Am I that much of a natural with children?” She smiled breezily.

Clearly, he was in no mood for jokes as her light-hearted comment fell on deaf ears and he continued to watch her through lowered lashes.

“You are with Theo. He rarely lets me even look at his prized comics, let alone ever sharing them with his nanny or a total stranger.” He paused, as if another thought had entered his handsome head. “What is your experience with children then?”

Where was he going with this? Rania knew she hadn’t had much experience with interviews, especially since taking over the shop from Belle, but this was strangely beginning to feel like one. As tempted as she was to tell him to mind his own business, she felt strangely compelled to carry on with the bizarre conversation. “Baby-sitting jobs here and there. Not a lot of those since running the shop. I’m a volunteer reader at the library during children’s hour on the weekend. Why?”

She could feel his eyes travel over her face, as if trying to pin something down. He nodded and she felt like he had already come to a decision though she had no idea what and how the hell it involved her.

“What about a boyfriend?”

Talk about coming out of left field! Turning swiftly, Rania busied herself rearranging the already pristine shelves. Her face flamed at the reminder that the last time she had a boyfriend or even gave herself time for one, Belle was still alive and that had been five years ago. The ‘ignorance-is-bliss’ tack was clearly what this situation called for.

His impatient exhale was a sure sign her response had worked. Perhaps now he would back off and let her be. “Yes, I’m sure you did. What I would like to know is if you have one now?”

That did it. How dare he come into her shop and start questioning her about the state of her non-existent love life. If this had been an interview she would have sued…for something.

“I’m not sure that is any of your business Mr.Trenton!”

“Just answer the damn question!” The sharp comment exhaled on a frustrated sigh had her turning around and facing him. This was too much.

“As I said, I don’t see how that is any of your business. To be honest, I’m beginning to wonder what’s with all the questions. What do you want, exactly?”

She knew as soon as the words left her lips that she was going to regret the answer. She could see his Adam’s apple bob as he swallowed, his eyes steady as he looked at her.

“Miss George, I would like to hire you to be my son’s full-time nanny.”

He had to be joking.

However, judging from the serious look on his face, Rania didn’t think that was the case. “You can’t be serious. I mean, you hardly even know me and besides I can’t. Unless it’s escaped your attention; I have a shop to run and it’s very busy.”

He arched one eyebrow at her while looking around the shop. Rania knew what he saw; the paint peeling, the scratched flooring and the worn counter. Minor details she hoped to fix when business picked up again, as it surely would.

“If you insist.” He sighed, as if placating a child. “What I am suggesting will work out for both of us. Theo has his half term coming up in a week’s time and I am flying out to the States for a big production commercial. He obviously likes you and I have a feeling he won’t run away from you.”

“And this works out for me how?”

“I will pay you double what you earn here which should be enough to cover any repair expenses your shop may or may not need,” he said, shoving his hands in his pockets and fixing her with his glacial gaze.

What was it about this man that rendered her speechless; something she was sure she had never encountered before tonight. “I can’t just up and leave. What about getting someone to cover my shop?”

“Do you have someone to cover? A trusted friend, maybe, or reliable weekend help you could ask?”

Yes, she did; damn it. Chewing on her lower lip, she nodded, annoyed to see a wide grin begin to spread on his too-handsome face.

“You’ve got a week till the half term. Here’s my card, in case you have any further questions,” he said, digging in his back pocket and producing an immaculate ivory card with black embossed letters on the front.
“C’mon, Theo. Ready to go?” he asked as the reason for this whole situation bounded through the door toward a navy Jaguar outside.

Lifting a hand to wave him off, she didn’t see a point in correcting him. After all, she wasn’t going to take the offer…was she? 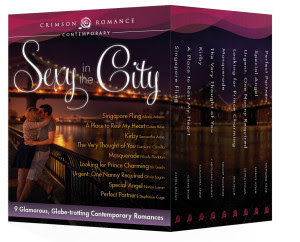