October 09, 2015
I'm so excited that Crimson Romance, who published my first full-length novel (Perfect Partners) have picked my contemporary fairy-tale retelling, Music to Her Ears, as one of their 'quartet of fractured fairy tales'.  The anthology is due to be released a month from today (on November 9th). It's a privilege to be featured alongside three very talented authors and it was enormous fun working out what a certain fairy story would look like if it took place in the present day with three human brothers in place of the bears.  I love the cheeky fairy-tale cover.  What do you think? 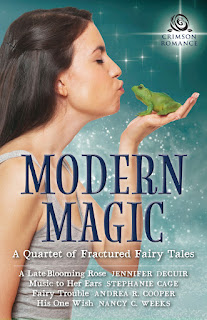 What if Cinderella ditched the prince's ball and sent her fairy godmother to find love in her place?

“So, tell me about yourself … Goldie, is it?”
Hannah pulled a face at that most hated of interview questions.
Kayleigh kicked her under the table, and she hastily rearranged her features back into a mask of blandness.
“Actually, it’s Hannah. Hannah Loxley. I’m twenty-four; I live in Surrey. I worked as a PA for three years, in London, and recently moved into marketing, but I’d like to get back to being a PA.” She wasn’t lying— just being a little selective with the truth.
“Hannah. Not Goldie?”
“That’s my nickname,” she explained. “As Kayleigh said, we’ve known each other since school. Nobody else gets to call me that, though.”
Hannah gulped as she realized she’d just laid down the law to a major celebrity. And a major hunk at that. Even on this small screen, his charisma was obvious. Though he presumably hadn’t been expecting Kayleigh’s call, and it was late in the day, his dark hair was perfectly slick, and his dark navy suit jacket sat smoothly over a perfectly ironed striped shirt. Altogether too perfect for Hannah’s liking, but she wasn’t looking to date the man, just get a job and a roof over her head.
“Noted.” Jamie’s face softened as he laughed at her, but in an instant, the cool mask was back, as he carried on speaking. “Bear with me a moment, if you don’t mind. I’d like my brothers to speak with you, too. Mike! Bill!”
A rumpled head of equally dark hair joined Jamie on the screen.
“This is my youngest brother, Bill,” Jamie explained, as if she hadn’t seen them on screen a dozen times and even giggled drunkenly over their gorgeousness when they appeared on the big New Year’s countdown show on television. She remembered Kayleigh and Sharon practically coming to blows over whether suave Jamie or casual Bill was the more attractive. Hannah had diplomatically refused to join the fray, though if she had, her vote would have been for the middle brother, Mike, in any case.
“This is Hannah,” he went on, “not, under any circumstances, to be referred to as Goldie.” From the way Bill’s eyebrow twitched, she had the feeling he was looking forward to finding out what happened if he uttered the forbidden nickname.
“Hi, Bill,” she said, then winced inside. She couldn’t have sounded lamer if she tried. “Is there anything you want to ask me?” she added.
“Has big bro given you the third degree yet?”
“Not at all,” she replied politely. She could imagine him doing so, though.
“Oh well, I’m sure Mike will when he gets here, so I’ll hold off for now.” Bill gave her a grin clearly intended to charm.
“Will what?” came a voice from off camera.
Bill put his fingers to his lips, gesturing to Hannah that she shouldn’t tell him what had been said.
“Will give the lovely Hannah the third degree,” Jamie spilled the beans.
“There’s a difference between asking a few simple questions and giving someone the third degree. If one of you had thought to ask ‘the lovely Kiki’ a few simple questions last week, we might not be searching for a new personal assistant this week.” The speaker, presumably Mike, got louder over the course of this speech, as if he was coming closer to their webcam, but he still remained out of view.
“Oh, sure,” Jamie said, his lips curling. “Because she was so going to tell me she was on the run for conning little old ladies out of their life savings, if I’d only asked her a few simple questions.”
Without warning, Jamie’s face shot out of view as he ducked a mock punch. The figures on screen shuffled around, and this time there were three. And what a third.
Yes, Hannah thought, he was definitely the most attractive of the three.
Andrea R Cooper cover reveal Crimson Romance fairy tale Goldilocks Jennifer DeCuir Modern Magic Nancy C Weeks