Affirmations Do Work: Affirm Your Way to Writing Success 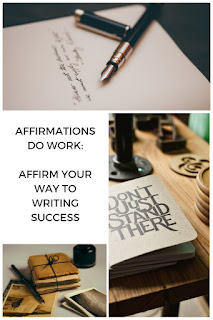 Recently I read a post on one of my favourite sites, mindbodygreen, entitled ‘Why Affirmations Don’t Work and What You Should be Doing Instead.’  I’d started an argument with the author before the page had even finished downloading. A few minutes later I realised that for many years I’d actually agreed with the author, and in some ways I still do.

The word ‘affirmations’ is often associated with new age thinking, get rich quick schemes and unrealistic positive expectations.  If by saying that ‘affirmations work’, you mean that you expect to sit in front of the TV eating junk food and affirming ‘I’m rich, famous and beautiful’ and have it suddenly become true, then it’s perfectly accurate to say that they don’t work.

But at its root, the word ‘affirmation’ simply means ‘the act of affirming something’, and affirm has two meanings: to state something publicly, and to offer emotional support or encouragement. So affirmations are simply statements of support, made publicly or at least out loud or in writing. It’s possible to affirm one’s commitment to an outcome, or to offer oneself support or encouragement with a goal by way of affirmations. And in this broader sense, I definitely believe in the value of affirmations.

The world is too full of negativity and drains on our energy. Anything that helps to refill the well of positives has to be a good thing.


Sure, if you make your affirmation too far from your current reality, it’ll trigger the part of your brain which responds like a sarcastic teenager: 'yeah right. Like heck'.  (OK the word might not be heck, but I'm mindful that I’ll probably want to show this post to some of my older friends at writers' group who aren’t fans of strong language).

I'm a slender size zero? That size doesn't even exist in the UK.

That’s another problem with a lot of the affirmations you’ll find floating around the Internet. Most of the ones I’ve come across are geared towards a US audience. Which means they generally just confuse me, rather than inspiring me. Money affirmations are accompanied by pictures of dollar bills. Healthy eating affirmations mention foods I’ve never even heard of.  What the heck are zucchini?

Which brings me to rule number one: for your affirmations to work they must be personal, using language which means something to you.

Rule two: they must also be believable. The article I mentioned earlier suggested using questions instead of statements, but statements actually work just as well… provided they state something that feels true, or at least possible, for you.

That’s why I say affirmations are the words that bridge the gap between where you are and where you want to be. Each affirmation you use should take you a tiny bit closer to the desired reality.

Want to be a bestselling writer but never finish a project? Don’t start by affirming that you’re a rival to James Patterson or JK Rowling. Start by affirming that you complete every project you start. Or if even that feels too much, how about, ‘I always know the next step to take in my projects’? Or ‘I enjoy taking the next step on…’ and finish by naming the next project you’d like to complete.

Affirmations can work, but making them effective requires careful thought and deliberate choice of words.  Fortunately you’re in the best possible place to achieve that – after all, you’re a writer, aren’t you?!

Have you tried affirmations to help with your writing goals? Did they work for you? I'd love to hear your experiences in the comments.