Do you need to change your beliefs about writing?


It surprises me slightly that I recently felt the need to write a blog post about affirmations.  I used to think they sounded woolly and new agey and I couldn’t imagine them working for me. Somehow, though, I couldn't quite give up the feeling that this technique had something important to offer me.  It had worked for Jeannette Maw and Louise Hay and so many other people I admired, that there had to be something to it.
The idea of affirmations started making a lot more sense to me once I read a bit about how the mind works, and realised that the work some coaches I admired were doing with affirmations was very similar to the model developed by Harper and Ellis and espoused by a whole generation of therapists.


The model, often described as ABC, provides a framework for understanding how an event (activating event, A in our alphabet) triggers a set of beliefs (B) which in turn have consequences (C). I’m grossly oversimplifying here, partly due to my own limited knowledge and partly to keep this post a reasonable length, so please bear with me as I try to explain how this applies to us as writers! For a writer suffering a crisis of confidence, the ABC model might look something like this:


A - activating event - my story is rejected for an anthology


C - consequence - I give up submitting and lose interest in my writing.


The ABC model suggests that if we can shift our beliefs, which are the turning point in the model, we will then think differently, act differently and get different results. In our writing example (a fictional example, obviously, because I've never sulked on receiving a rejection… and if you believe that you'll believe anything!) I might look at the event of my story being rejected and the belief that it's a poor piece of writing and I'll never get anywhere as a writer. Then, knowing that this will lead to the consequence of losing interest in my writing, I might choose to look for a different and more empowering belief.


Instead of believing I'll never get anywhere, I might choose to believe that what I have to say is important, but this story hasn't found its right home yet, which would result in the consequence of deciding to send the story off to another anthology where it might be accepted, enter it into a competition, or even just post it on my blog. All of which are much more positive and productive than giving up submitting my work. 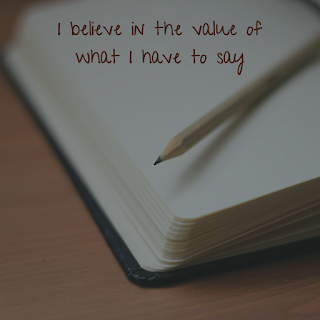 And how do we change our beliefs? It starts with an awareness of the belief we want to change and a decision about the new belief we want to adopt.  But once I’ve chosen a new belief, it isn’t going to imprint itself on my unconscious.  I need to practice asserting and acting on the new belief I’ve chosen, which is really nothing more than affirming the thing I’ve chosen to believe and acting on the new belief until I start seeing different consequences.  In this case, I believe in the value of what I have to say, and my ability to persist until I find the right publisher or way of reaching my readers. As a result of this belief, I’m regularly writing and submitting work again, and eventually seeing positive consequences in the form of work accepted for publication, and payment landing in my bank account! Those are the beliefs I'm choosing to affirm this week.
Are there any new beliefs you'd like to adopt about your writing?
affirmations creative writing publishing submitting