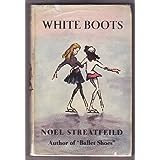 In the run-up to the publication of my ballroom dancing novel, 'Perfect Partners', I've been thinking about the things that inspired me to want to write about dance, and realising that my fascination with the subject goes back a very long way.  Unlike many of my childhood friends, I didn't take ballet classes, so apart from the odd country dance in the school gym when it was too rainy for outdoor play, I didn't do a lot of dancing until I took my first ballroom class, aged sixteen.  Having said that, though, I can trace my interest back much further than that, to a book by that most beloved of children's authors, Noel Streatfield.

I wonder which book came to mind for you when I mentioned that name?  Usually when I talk to people about Noel Streatfield, their eyes light up and they respond with fond memories of the Fossil children in 'Ballet Shoes', and it's true that is a wonderful book, but it's not the one that I've returned to time and again.  The book I loved and read so much that I ended up with two copies - a pristine one to admire and my old tattered copy to return to when I need a fix of inspiration - is 'White Boots'.  Which, technically, isn't about dancing at all, but about skating, although the similarity between the two is evident from the very similar places which 'Strictly Come Dancing' and 'Dancing on Ice' occupy in the hearts of the British viewing public.

Long before either of these programmes existed, I was enthralled time and again with Streatfield's story of frail shopkeeper's daughter Harriet who takes up skating while convalescing from an illness and soon attracts the attention of junior skating star Lalla Moore.  The friendship and the developing rivalry between the two girls kept me on the edge of my seat throughout.  As a child, I loved reading about Harriet's growing enthusiasm for skating and her surprise at discovering her talent for it, and comparing this to the shock it was to talented Lalla when for the first time she faced a step that was beyond her capability.  As an adult, I became more aware of how sensitively Streatfield handles the class divide between the two girls, and digs deeply into the challenges facing an ordinary family when they discover their child has an extraordinary talent... for a sport usually saved for much more privileged families.

Although I wasn't conscious of it when I was writing 'Perfect Partners', I can't help thinking that when I described Lisa's struggles to fit her passion for dance around a very necessary day job, I was casting her slightly in the mould of the 'ordinary' Johnsons, and when I decided that my hero, Redmond, took up dancing while convalescing from a football injury, that too might have owed something to an echo of Streatfield's delightful story.
'Perfect Partners' Ballet Shoes ballroom dancing Crimson Romance Dancing on Ice fiction Noel Streatfield romance Strictly Come Dancing White Boots