March 10, 2015
It's always a pleasure to welcome a fellow Crimson Romance author to my blog, especially when they've got something to celebrate!  Here's Melinda Dozier with her brand new release, New York Minute! 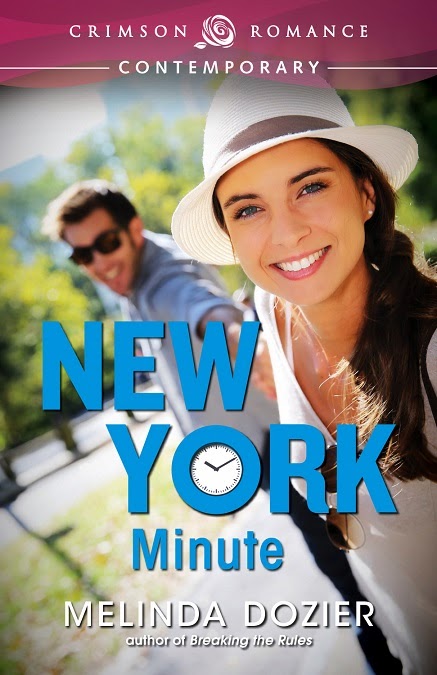 So when rock star Diego Diaz flashes his bedroom eyes at her during a wedding reception, Veronica swallows her shyness and leads him to the nearest hotel room. Now this total sex god keeps popping up in her life, and she finds herself telling some not-so-little white lies to keep him interested.

Diego's world evolves around music, women throwing themselves at him, and having fun. His lifestyle hasn't allowed him to find the right girl to settle down with until now, but his own secret stands in the way of forming a lasting relationship with Veronica.

Is their love destined to last for only a New York minute?

Testimonials:
"They have the connection, physical and emotion … However, they left out some things from each other and that's the real dilemma here. It's all good because it ends nicely!" — Bookaholic Fairies

“Every time I was away from this book, I couldn't wait to get back to it. This is an amazing read...” Reader

“Melinda has done it again!!! I absolutely love the way that she makes us all swoon for her characters in her stories and not be able to put it down until we are done.” Reader 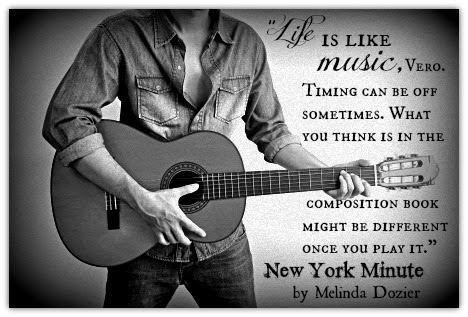 Time to focus on the Cosmo article she read two days before about flirting. She sipped her citrus martini, and as she brought the glass down, she licked her lips and glanced at her target. He actually flinched, the hunger in his eyes darkening. Barely enough for anyone to notice, but she did. She ran her hand up and down her neck, closing her eyes for a minute. When she opened them to look his way again, he had already started to walk in her direction. No, he didn’t walk; he actually strutted like a man on a mission.

She was his mission. Shit. Shit. Shit. Play it cool, Veronica. You’re a strong, sensual woman. You can do this.

She sipped her yellow drink again to calm herself, and if she was lucky, he wouldn’t notice her shaking. Calm. Sensual. Like a boss.

He positioned himself in front of her, one hand in his pocket and the other holding a tumbler of brown liquid, and rocked on the heels of his dark Dolce & Gabbana brogues.

“Hello.” His voice reverberated down to her core.

She gulped her martini to gain more liquid courage, but rather than bravery, the unthinkable happened. She swallowed the cherry that swam in her drink and the tickle in her throat drove her into a coughing frenzy.

She tried to smile through it, to let him know all was fine and she could still be the sexy seductress. As his large, firm hand patted her back, she fanned the air and grabbed his tumbler, downing the thick liquid.

After a last cough, she cleared her throat one more time. “Whoa. What was that?”

“Whiskey. Neat.” He grinned, his gorgeous caramel eyes lit with an inner glow. “You okay?”

A warmth spread over her cheeks. Holy freaking embarrassment. “It was strong.”

“I could’ve warned you, I guess, but you were busy.” He grinned and squeezed her shoulder with his large hand.

Was that an accent? Damn, could he be more perfect? Immediately, she glanced at his hand that revealed several tattoos peeking out of his jacket hem, from his wrist all the way down to his fingers. No ring. Thank God.

“Can we forget that happened? I’m not usually like that.” She waved her hand in the air and winced inwardly.

God, she wanted to erase that doomed first impression. She was confident, dammit. She didn’t want this dreamy man to know she could be less than sophisticated. Her act was more difficult than she imagined.

“It’s a shame. I kind of liked the unusual first encounter. Not that I want you to choke, but I was ready to save you.” He braced his tattooed hand against the wall behind her, moving closer. His manly smell was soapy, with a hint of wood.

He squinted his glowing eyes and turned his head to the side. He didn’t say anything for a long time, just studied her and then rolled on the heels of his feet. “Who are you?”

His “r” rolled off his tongue with a Spanish accent of some kind.

Damned if the man’s touch sent shivers all the way to her toes. “So someone like you would find me.”

“A man with questions … and a devious grin.”

As suspected, his smile grew and his gaze sought hers. “Well, I came over to tell you how stunning you look, but being a woman of such deep insight, you might take that the wrong way, no?”


“I’ll take it any way you want.” Yep. The alcohol had definitely gotten to her. 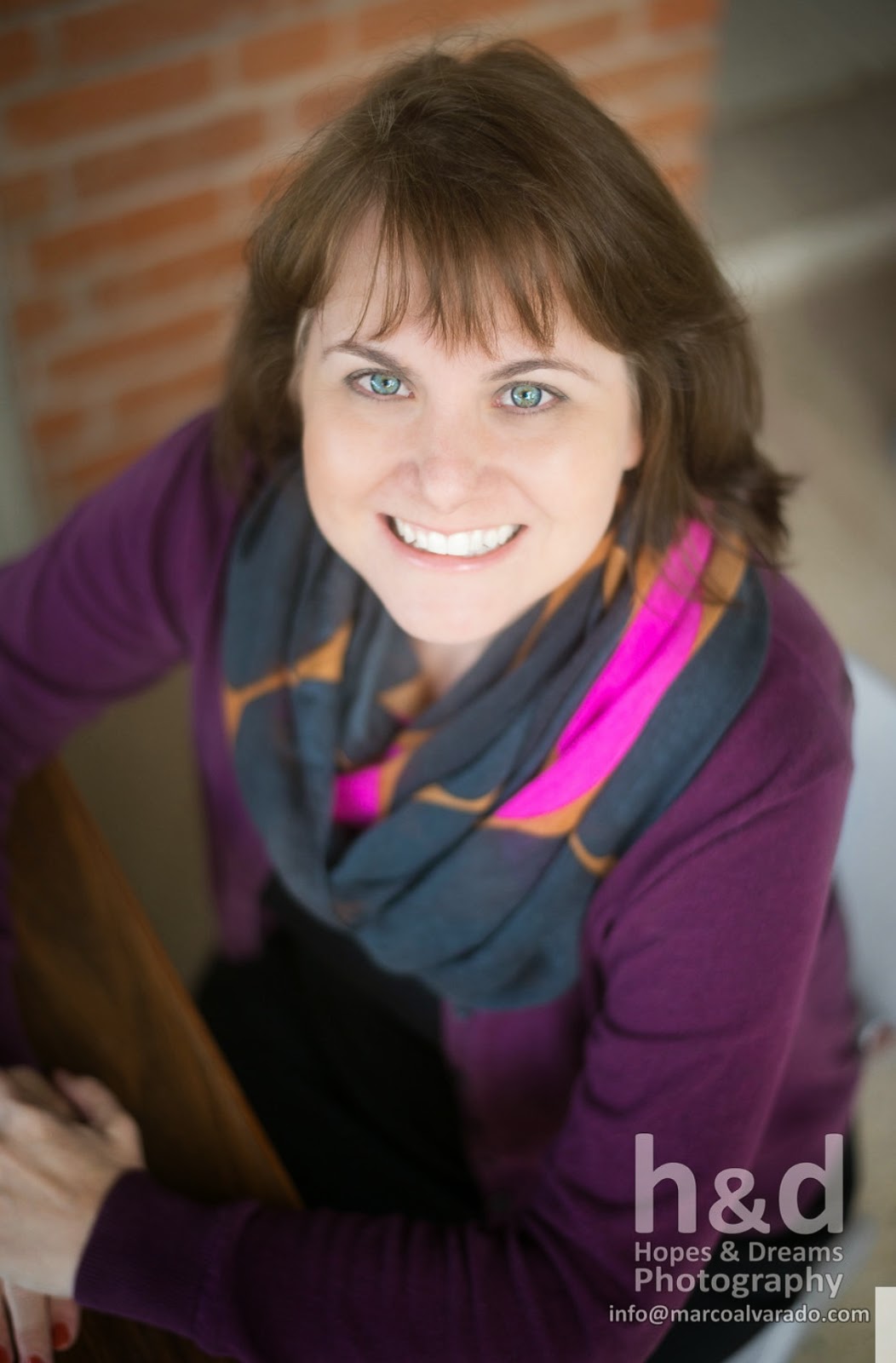 Melinda is a multi-published contemporary romance author with books from Crimson Romance, Swoon Romance and The Wild Rose Press represented by Dawn Dowdle of Blue Ridge Literary Agency. She lives in Guatemala, Central America with her husband/college sweetheart who brings "mucho amor" to her life. Melinda enjoys being the queen of her household and dreams of being pampered fully by her three boys once they are grown. Melinda's guilty pleasures include reality t.v., traveling, blogging and playing Farmville. 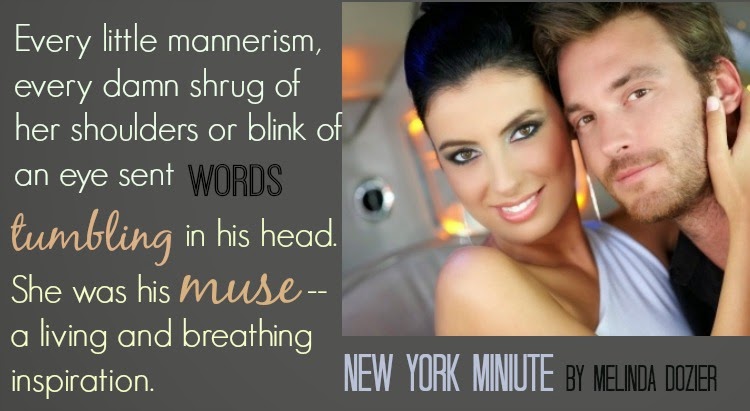